Chapel of the Good Shepherd

In the center of a brick plaza in the middle of the Roosevelt Island sits the Chapel of the Good Shepherd. The Chapel is characterized by a multicolor effect produced by mixed use of brick and stone and stained-glass windows.

It was built by Frederick Clarke Withers in 1889 to serve the residents of the many Welfare Island almshouses that were constructed for New York's destitute in the 1850s. Withers' mentor, who brought him from England to America, was the man credited with envisioning a "New York Park" which would become Central Park. 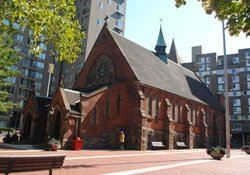 The Chapel of the Good Shepherd was restored in 1975 and is now primarily a community center.